Syphilis is usually diagnosed by a blood test, sometimes in combination with an examination of lesions. Shortly after infection, the body produces infection-fighting antibodies, which can be detected with an inexpensive blood test. These antibodies can stay in the blood for months or years after infection. It is difficult to tell from the blood test how long a patient may have had syphilis. Every pregnant woman should receive this blood test, given the risk of transmitting the disease to her developing baby.

Syphilis has four stages: primary, secondary, latent, and tertiary. It is most infectious in the first two stages. When syphilis is in the hidden or latent stage, the disease remains active but often with no symptoms and is not contagious to others. Tertiary syphilis is most dangerous for your health.

The primary stage of syphilis occurs shortly after you are infected with the bacteria. It begins with a small and painless, but highly infectious, round sore called a chancre. This sore may appear on or inside your mouth or genitals, wherever the bacteria entered your body.

On average, the sore shows up around three weeks after infection, but it can take between 10 and 90 days. The sore remains for anywhere between two and six weeks.

Syphilis is transmitted by direct contact with a sore. This usually occurs during sexual activity. 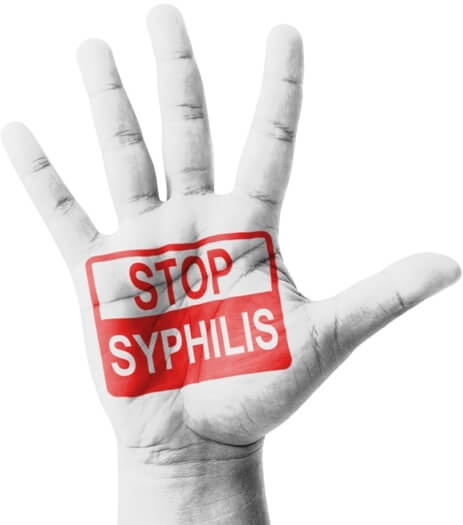 During the second stage of syphilis, you may experience skin rashes and a sore throat. The rash will not itch and is usually found on your palms and soles. Some people do not notice the rash before it goes away.

Other symptoms of secondary syphilis may include:

These symptoms will go away whether or not you receive treatment. However, without treatment you will still be infected.

Secondary syphilis is often mistaken for another condition.

The third stage of syphilis is the latent or hidden stage. The primary and secondary symptoms disappear and you will not have any noticeable symptoms at this stage. However, you will still be infected with syphilis. The secondary symptoms could reappear. You could also remain in this stage for years before progressing to tertiary syphilis.

If you think you might have syphilis, immediately visit Sablok Pharmacy as there are no home remedies that will cure syphilis.